The rest of the village still seemed asleep as I walked the dog yesterday morning, then a couple of guys were packing kit into cars with bikes on outside the B&B, ready to hit the Brechfa trails. We were getting ready to drive an hour and a half North West to ride the Dyfi Winter Warm up. We've ridden the Dyfi enduro a few times, on bikes ranging from fully rigid singlespeeds, to six and half inches of full travel and love the event - so it was good to come back up to the forest at a different time of year for the Winter Warm Up.

Starting on the edge of Corris, it differs from the Spring Dyfi enduro in a few ways. The entry into the forest by road was much shorter, there were three distances to choose from; 12, 20 and 28 miles and these were in the format of three laps.  Due to the weather conditions, the route kept away from the highest hills but there was still going to be loads of climbing, always a good thing as it also means there will be loads of descents, and in the Dyfi forest that means a lot of fun.

We arrived in plenty of time, and immediately saw people we knew as we made our way to sign on, got chatting, started making our way to sign on and bumped into more familiar faces.  It was really good to catch up with folks we hadn't seen for a while. Suddenly people were gathering to start and I was still tying the number board on my bike.
I took my place at the back of the pack on our xs Cotic Bfe Hire bike (its first outing and test)  and continued chatting, great to catch up with guys from the Forestry Commission taking part, and to chat whilst riding out with my publisher, Peter Wood http://chargingarc.com/ riding out with him up the same long first climb, only this time there was no band thumping out tunes from the top to welcome us. A thick mist hung in the Corris valley, the hills rising proudly above, but despite the ice on the ground, people were soon stopping to remove layers and I felt desperately over dressed as the sun came out in full force.  It was a stunning day in the forest. 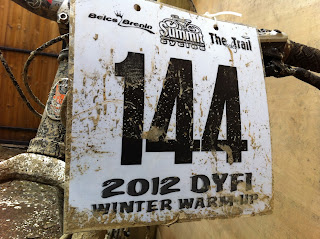 At the top of the climb we hit the first section of singletrack, part of the Climax trail, Pete disappeared ahead and was gone, as I got used to a new bike, and being back on a bike(!) as I realised my lack of preparation (a 9 month old little boy does effect your training time) ... but not for long... Suddenly I was right back there, geling with the bike and carving the swoopy trail as if I had never been away.  What a superb little bike it is, and the kit we are running on it just seemed perfect, super plush 44 bombers, Hope wheelset, SLX drivetrain and brakes, and Shimano pro finishing kit.  The slightly wider bars we are using on the BFe's really came into their own on the descents, that I'd last ridden on six and a half inches of travel, yet they were just as much fun, if not more so, on this great little hard tail. A couple of sections of singletrack later and I was buzzing, the conditions were great. 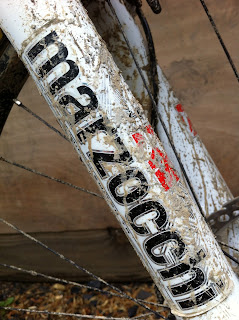 The ground was hard underneath from the frost, there was the odd bit of ice to avoid but it added interest to the trail.  I sailed by the water station and onto my second lap, the trails were getting churned up and I was soon plastered with mud, and soon ran out of water.  But continued on to slip and slide through the course and see the conditions changing from the first time around. Two laps was enough for me - it was a great course, but I wasn't going that fast and should have stopped to refuel at the end of the first lap.  By the time I was riding back on the road I was starting to suffer a bit! 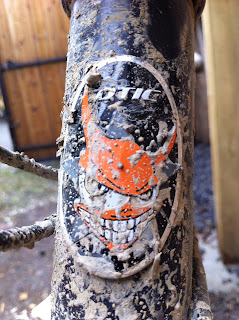 A great afternoons riding in a relaxed atmosphere using some of the best trails the Dyfi has to offer - a highly recommended event...  Editors Note - Next time I will put in the training and enjoy the climbs as well as the descents though!
Posted by Bikebrechfa.co.uk at 14:00